I just started an after-school chess program at the JEI Learning Center in Bensonhurst, Brooklyn. Currently we have a beginner/intermediate class at 10am on Saturdays. So if you live nearby (you can get there quickly by subway too- they’re very close to the express D line), please contact the center at : 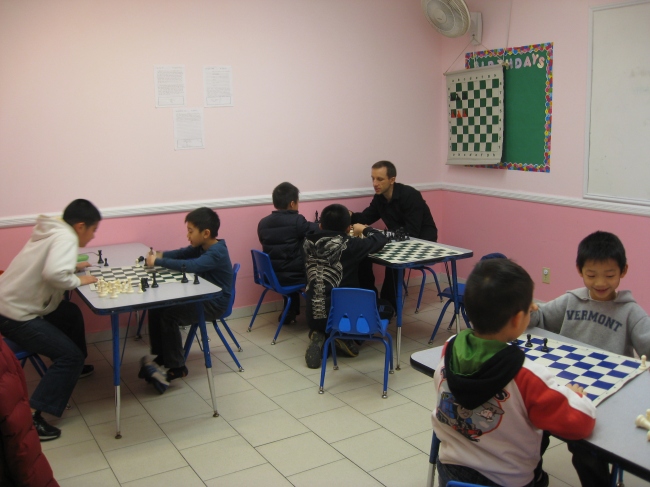 Just saw it blogged somewhere else and I thought I would repost it- there are many parallels between making decisions in chess and in daily life, and there are plenty of them, as you can see here!

Tournament chess is very exciting- whether following super-grandmaster events like the ongoing Fide Candidates  tournament in London, or playing in one when you are a kid! The big scholastic chess tournament- “Supernationals”, will take place in Nashville, TN on the weekend of April 5th-7th and students from all over the country will be competing on 64 squares. Last week, I was invited to conduct a training session with the chess team at the Robert F. Wagner Secondary School in Long Island City, Queens and it was a very productive time; we plan to meet again with the team before they leave. Good luck to all Wagner Chess Club players!

The strongest tournament in the history of chess , 2013 World Championship Candidates , takes place in London from March 14 – April 2nd, and is an 8-player double round-robin, with the winner earning the right to face the current World Champion, Vishy Anand from India, in a match later this year. I’ll be very excited to follow this incredible event for the next two weeks and a half. Who am I rooting for? My favorite is the strongest player in the world by rating today, Magnus Carlsen from Norway. He is 22 years old and his rating is astonishing 2872 points. So go Magnus! Below is a picture of Magnus& yours truly in NYC last year. The main event website, where you can view games live, with live grandmaster commentary , video reports, etc is here .

I’m starting new group classes at the beautiful Bird River Studios facility in Williamsburg, Brooklyn. They have a lot of cool classes including studio art, theater and acting, creative writing and more, and now it’s time to start a chess club! Currently we’re taking reservations for after-school classes on Mondays and Wednesdays, beginning at 3:30. We’ll start from the basics, showing the kids all the fun they can have checkmating the king, and will move on forward- our ambition is to have a new cool neighborhood chess club for kids and adults alike with regular tournaments and lectures. Come join us! Please click on this link which will take you to the Bird River’s website where you can make the reservation.

If you live close to the Park Slope/Gowanus area, it may be convenient for you to meet me for classes at the Two Moon Art House& Cafe , which is a charming, quiet cafe with beautiful art exhibits on the walls, and a lot of table space for us to sit down and study. You can read on their website that “Two Moon is a neighborhood art gallery, music venue, film house, cafe and wine bar serving homemade baked goods, seasonal entrees and delicious 40 Weight coffee. Two Moon’s treats and coffees are perfectly paired with rotating visual art exhibits and live performances.”. The only thing I could add to this is that their baked goodies are beyond delicious, I enjoy them every time I’m there, and that Two Moon’s owners, Joyce and Danielle, are the friendliest hosts you’ll ever meet! It’s a great place for a class and just hanging out afterwards. Check them out- they are located at 315 4th Ave (between 2nd& 3rd Streets), few blocks south from the Union St stop of the R train.

Speed chess meetup on Fridays at the Tea Lounge in Park Slope, Brooklyn

If you’re interested in my classes and would like to meet me in person, or simply would like to play a few casual games, I have been organizing the Brooklyn Speed Chess meetup group on Fridays for the last few years. We meet at the Tea Lounge at Union St in Park Slope, we start at 7. Come meet me and the guys from my chess league team, you’re guaranteed to get a lot of good games.

I now offer online coaching, too.

While my main activity as an instructor is working with my individual students and groups in New York City, I’m also available to anyone who wants to improve their level of play but doesn’t have an access to the coach where they live. I could help you in either of the two ways:

a) Deep analysis of your games: you send me your games that you have played and I analyze all that happened, suggesting improvements- with variations and a lot of text. Based on your games, I will recommend material you should study for your future games- certain opening variations, best players who have employed them, particular games to look at and literature to read. This is beneficial to you to have a real commentary of a strong player as compared to just the variations suggested by an engine and their numerical evaluations- computer will not talk to you in real words about the pawn structures, piece activity, typical plans in a position, transition from a middlegame to an endgame etc, which a strong player can explain to you in plain language. For examples of my commentary, please check my articles on the brooklyn64 blog .

b) Private one-on-one instruction via skype . If you have internet access and speak English (or Polish too), you don’t need a live coach across the board from you. I will set up the study positions on my screen and will share them with you so you can see them on your screen during the lesson as we discuss them (I will email you all the study material along with homework once we have finished). 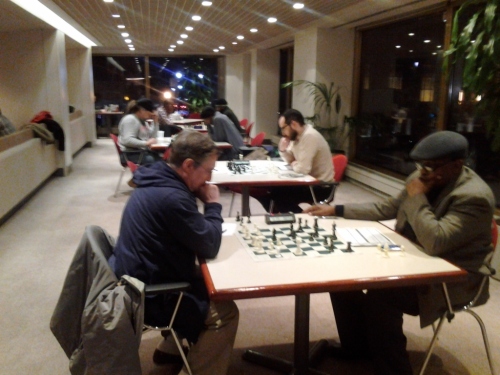 Both our teams won yesterday, allowing only 1 draw out of 8 games total! Members of the second Brooklyn Tea Lounge team on the right- Al, Boris,Ryan and Leon.

I scored 3.5/6 points at the FIDE Monday  , my first tournament of 2013 , at the Marshall Chess Club , which was the shared best result among the players in the U2000 rating group.